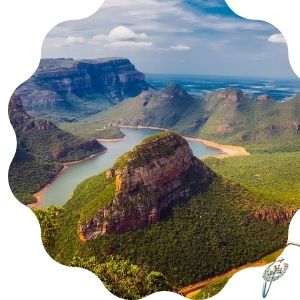 Indian nationality but with the soul in South Africa

The geographic freedom of the freelance

I’ve been a freelance proofreader and editor for most of my career (since 2014). I wouldn’t trade this kind of work for any other … it’s given me more freedom, independence, flexibility, and perhaps even more money than any other professional path. Of course, being a freelancer means that I can work online from anywhere in the world. However, I haven’t really been able to take advantage of that benefit because the Indian passport is quite restrictive when it comes to securing work and travel visas for other countries. In my spare time, I pursue creative opportunities, such as a few travel writing assignments that were published this past year.

Why did you move to South Africa back in those days? How did you come to choose this country? I lived in South Africa as a student. My brother and I had been attending a South African (SA) school in Mozambique, and my parents decided to continue our education in a small SA town called White River. We went to boarding school there for over six years. After that, I attended Rhodes University in Grahamstown (another small town in another part of SA) for four years.

A South African education is a pretty good and respectable one, especially in comparison to its neighboring countries, which is why you’ll find many international students there.

How long did you live there for? I lived in SA for nearly 11 years. But, even when I wasn’t living there, I visited countless times for vacations, shopping/events, medical appointments, etc. The country will always be a big part of my life—after all, I have a South African birth certificate, and I still have a South African accent!

What did you have to do to move there? Did you need a visa? In my case, I applied for a student visa, which had to be renewed at least a few times over the years. Some of the conditions for receiving the student visa included:

For those who aren’t studying, there are a variety of visas available, ranging from different kinds of work visas to a retired person’s visa and permanent residence. Each type of application has its own unique requirements, and I strongly recommend hiring a (legal) expert to help you navigate the often bureaucratic process.

The other kind of South African visa that I’m very familiar with is the visitor’s visa (for holidays/tourism). In my experience, the requirements for this visa changes as often as every month, so keep that in mind. But generally, they want to see:

What cultural differences did you notice between this country and yours?

For me, the culture shock wasn’t so bad because I had studied at a South African school in Mozambique, and I’d visited South Africa many times before studying/living there.

SA is one of the most culturally diverse regions I’ve ever known. I mean, the country’s nickname is the “Rainbow Nation,” and it has 11 official languages (including English)! But the negative things that may shock visitors, especially those from developed countries, include the following.

I know all of the above can sound intimidating, but there’s plenty of good too! Some of the best memories I have were made in SA. In general, South Africans are warm, resilient people with a fantastic sense of humor. They love wine/beer, good food, and sports of course. And if you are alert, friendly, and respectful, you can expect to be treated well.

Also, the glorious variety of natural landscapes and the thrilling wildlife scenes are reason enough to both visit and live there!

I haven’t had a full-time job in South Africa because of my visa’s restrictions. But from my limited experience, working in South Africa is not much different to working anywhere else.

Employers are generally easy-going, and can become good friends with their employees. The office atmosphere tends to relax a bit after lunchtime, and it’s fairly easy to maintain a good work–life balance if you don’t have a high-pressure job.

I used to search online whenever I looked for part-time work, and that usually turned out well. However, networking and having connections in the company/industry you want to work in definitely help. Popular job portals include:

Please note that it’s not easy for foreigners to secure jobs in South Africa, as the unemployment rate is already high, and there are plenty of qualified locals without work. I know someone with a master’s degree who was working as a housekeeper because there were no positions available in her field of work.

So, unless you’re highly skilled or plan to start your own business in the country (and hire South Africans), you may struggle. Also, in my experience, decent paid internships and traineeships are rare.

Cost of living in South Africa

Recommendations and advices before your travel to South Africa

Would you recommend living in this country? It’s definitely a great experience to work, study, or volunteer there. I would definitely recommend giving South Africa a chance, as it will be an unforgettable time in your life.

Living there permanently might not be for everyone, but spending at least six months to a few years there would be a wonderful opportunity and give you enough time to really get to know the country.

For those who would like to move there, do you have any particular advice?

Keep an open mind, be on your guard (in certain places), and maintain a positive attitude. Your time in South Africa can change dramatically from one week to the next. I’ll give you an example of two wildly different incidents I experienced in the same town:

Last but not least: curiosity and next project

Oh, and one last thing! There’s also “South African English” It may take you a short while to get used to, but after you leave the country, you may find yourself saying words like “ja,” “hectic,” “eish,” and “awe/howzit” often.

Hmmm. This is a mystery to me too. But when I figure it out, I’ll be sure to let you know, so stay tuned.

Interview conducted in December 2020 with @isabelle.anne.abraham.

This site uses Akismet to reduce spam. Learn how your comment data is processed.